Glee!  My poem gets translated to Arabic, by friend, Raed Aljishi, (poet, translator; Saudi Arabia) who has penned one novel, seven volumes of poems in Arabic and one in English: Bleeding Gull: Look, Feel, Fly.

Now read the poem right away! Alright, it’s Knotted Inside me. 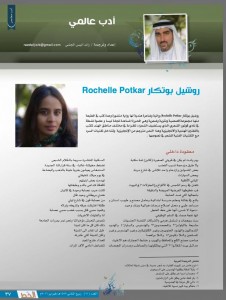 You can read the poem in English here:

Knotted inside me
At the time of my birth, my small town Kalyan, did not have a library.

It had no road rage, few beggars, one defunct traffic signal at Murbad Road,
and fewer cars.

The ice-factory owner, the mayor, a smuggler, a customs officer
were The Rich –
their bungalow gardens, terraces, compound walls
sprinted over by well-fed dogs

pressing against our imagination (mostly) during new year resolutions.

The Sindhis lived in a neighbour town
with plenty of gold and goods.

In the year of my sister’s birth
some of their buildings collapsed
like crumbling cake in blood and crust.

There was one gang-war in Kalyan
one Anglo-Indian killed,
by a Goan goon, on a night road
a gunshot running through his race, history, legacy.

And a schoolboy murdered
in cold gang-boy rage.

I, with the other girls were bottom-felt,
walking through the college corridors.

That was all we had,
before I left for the City.

But the town I had left behind –
like shoes outside a temple –
multiplied around me a thousand times.